Whilst attending a meeting at Tübingen University last year I was fortunate to be introduced to Patsy Yates, Dean of the School of Nursing at Queensland University of Technology in Brisbane. Among other things, we were there to discuss the role of the graduate nurse: we are just starting out in Esslingen and Tübingen but Australia has over 30 years of experience in graduate transition programmes. I mentioned my plan to come to Australia and she invited me to visit to further discuss the development and role of the gradate nurse and also to present the NurSusTOOLKIT. Unfortunately Patsy herself couldn’t be there due to other commitments.

The organisation of my visit was given to someone in the department. I received an ’Outlook Calendar’ request with the date and time of the meeting, which I accepted. At the time I did think it was really encouraging that staff were prepared to give up their Friday afternoon from 3.00-5.30 pm to listen to my presentation. As I wasn’t quite sure how to get to the school on campus I mailed the person who had been organising the meeting, with, unfortunately, no response. On the day in question I eventually managed to contact someone in the school who informed me everyone was ready and waiting for me to give my presentation …, but it was only 11 am???????

Now for all the mathematicians out there: the ’Outlook Calendar’ request stated 3.00. Brisbane was 8 hours ahead of Esslingen when the appointment was arranged, so 3.00 in Esslingen was actually 11.00 in Brisbane and not realising this at the time, I (wrongly) assumed 3.00 was 3pm. The meeting was actually planned for 11am. As there was no extra written correspondence, my assumption (3pm) remained, so I ended up being really late and rushing to get there on what was to be the hottest day of my travels so far, 36°C. Not really the temperature for such a stressful situation!

Although this is not the best start or preparation for a presentation, it went well as did the subsequent discussion. During the discussion I was asked if I had encountered climate change scepticism during my previous presentations in Australia and I answered I had. We discussed why this should be and came to the conclusion that the it might partly be because the Government are not really supporting the idea (by encouraging new mining areas and propagating ‘clean coal’) but also as in my previous blog, many livelihoods are dependent on industries which are causing global warming.

I also met Teresa Lewis, who was visiting QUT at the time. Teresa has a background in Green Hospitals and has been carrying out some work using the TOOLKIT. We had a chance to exchange ideas which was really good. AND her and her husband drove me back to my flat, so no chance of getting lost this time! Thanks again for that Teresa.

I’d also like to say a big thank you to Wendy who looked after me so well, she got me sorted out when I was running late with a taxi and some lunch and she also sent out a search party when the taxi dropped me off at the wrong place. Thanks again to Associate Professor Carol Windsor, Coordinator of Post Graduate Research who was so welcoming and chaired the session. 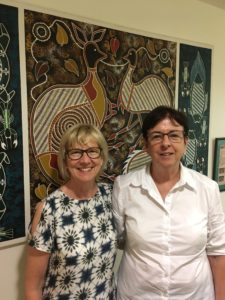 This site uses Akismet to reduce spam. Learn how your comment data is processed.